It was 18 months ago that I was contacted by Kim Scorza, the Executive Director of Seasons Center and we met at a local coffee shop.

Seasons Center is a comprehensive Behavioral Health Center that offers a broad range of psychiatric and behavioral health services to the people of NW Iowa. There are a number of offices in area towns, but they have renamed the facility in Spencer, Autumn's Center.

Autumn's Center was named in honor of Autumn Elgersma, of Orange City, Iowa who died on October 31, 2013 after being hospitalized for two days due to the abuse she endured while in the care of her babysitter.

During our meeting, Kim asked if I would be interested in doing a large portrait of Autumn for the new center in Spencer.  In all honesty, I really needed to give some serious thought to whether or not I wanted to take on this project. It was a painting that would need to honor Autumn's memory, celebrate her life but also be a reminder of the tragic loss of her life at age three. I took a couple weeks to think about it and finally made the decision to paint it.

The portrait was to be based on this snapshot of Autumn sitting at a table finger painting. 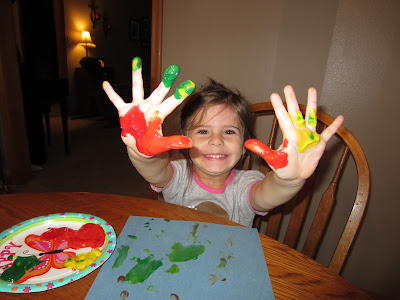 The painting was to go on a large tall narrow wall just inside the front doors. I decided the painting need to be vertical to best accommodate the space. A rather large piece at 54"x66". 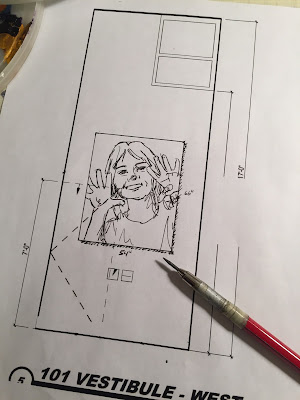 This decision was based on the drawings from the architect. A smaller horizontal painting wouldn't have the impact of a larger scale piece. After this small sketch was done, the project remained in the that state until the summer of 2016 when I knew I needed to get rolling. Progress on the facility was coming along and the doors would be opening in the Fall. It was time to get serious about painting again.