It's worth mentioning that I painted this in my garage, rather than in the studio. It would have fit in the studio, but I have to say the garage was a really great place to paint.  I cranked up the tunes and spent numerous hours sitting in a lawn chair contemplating the next phase as the piece progressed. Here is a panoramic photo with my son, Jack, taking the spotlight.

The installation in the new Learning Commons went great, due once again to the efforts of my Dad who was up to the challenge of building and stretching this large custom built canvas. Also to my brother Bruce who is a wiz when it comes to installing large works like this. 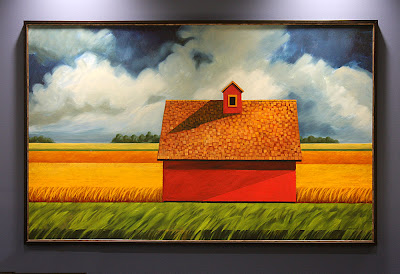 This is a photo of the finished painting taken just after installation.

So here is a little more in depth description of the painting, and the symbolism contained in the work.


It is titled "The Storehouse". Obviously, a corn crib is a storehouse for grain or corn, but it represents the new Learning Commons which is a storehouse for books and knowledge. It also represents the students and Christians as storehouses for knowledge and truth. As Christians, we believe all truth is from God, and you'll notice that there is only one way to get into this building from this viewpoint.­ It is the window above, so we are to look up, or look to God alone for guidance as we fill our storehouse. 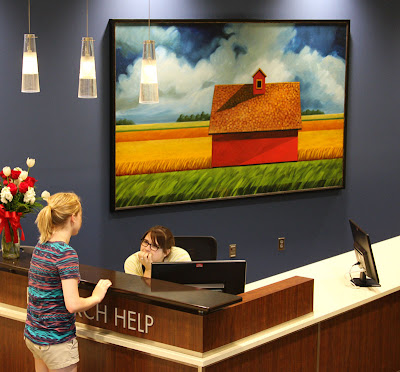 Here is a  photo that shows a little broader view of the space. 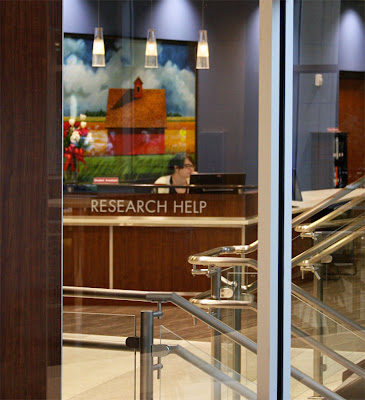 This view is as you walk in the front doors. I think this give you a sense of some of the geometric lines that are evident throughout the structure. If you get to Orange City, stop and take a look. It is easy to find and is one of the first things you will see as you enter the building. 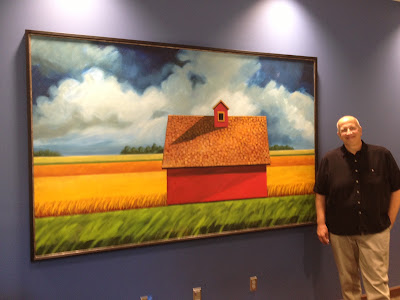 The dedication for the new Jack and Mary DeWitt Learning Commons takes place next week Friday, September 27. I consider it a privilege to have my work as part of this wonderful addition to the campus.

So you saw the proposal sketch that I submitted in May, and I was informed in June that they wanted me to paint it. "Great!", I thought to myself.

The college wanted me to talk with Robyn, the person in charge of the interior space in the Learning Commons. I spoke with her on the phone, and we discussed the painting, the wall she had in mind for the piece and a little about her thoughts and direction for the interior design.  She then suggested I tour the building with, Brent, one of the architects.

I met Brent and he showed me the wall near the entrance to the building. It was a big blue horizontal wall. This was a wall that needed a BIG painting. There is nothing like seeing a puny painting on a big wall. 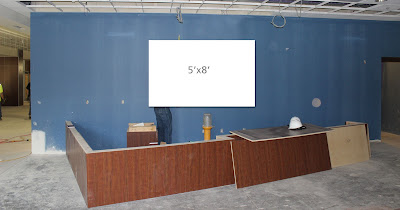 I shot a couple photos of the wall and then suggested a couple sizes for the painting to Robyn. We agreed that 5'x8' was going to be about right. I had been thinking all along that is was going to be a vertical painting less than half that size.

Now it was time to rethink the scale of the painting, and also to rethink it as a horizontal instead of a horizontal. Reworking the general composition wasn't too difficult. 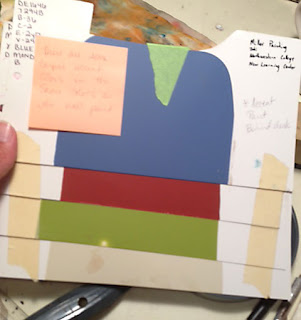 Robyn also sent me swatches of paint colors being used and I kept those within view throughout the project. The painting was going on the blue, so I wanted to make sure of my choices in blues and grays in particular.

I did some small color studies, utilizing a variety of paint color combinations. 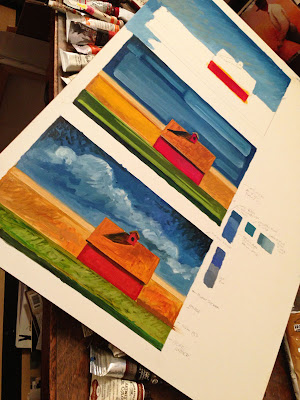 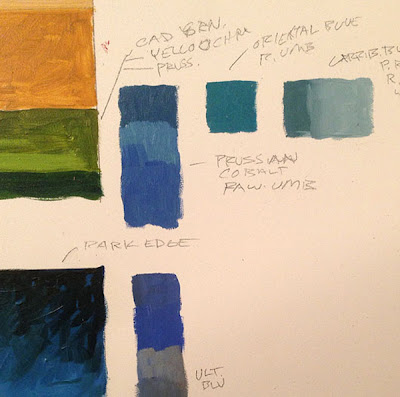 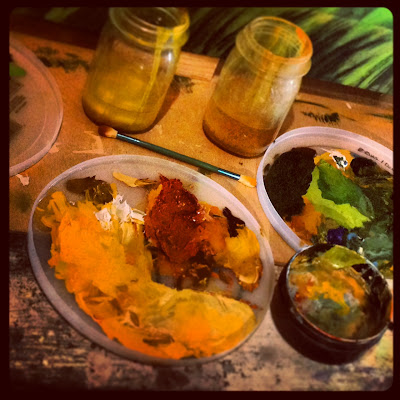 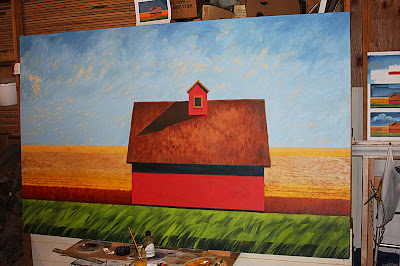 Here is the painting in an early stage. At this point I was not happy with the overall development of the painting. I was very mindful that I wanted this work to remain more graphic in style, mostly to complement the learning Commons itself–to become a natural part of the facility. That was hard for me to do, mostly because of the way I am use to working. I would normally work a great amount of detail into each and every element. I had to fight that urge. It stretched me artistically to do this, but in the end it was a sense of accomplishment. The next post will show the painting installed.

Posted by John Vander Stelt at 9:09 PM No comments: