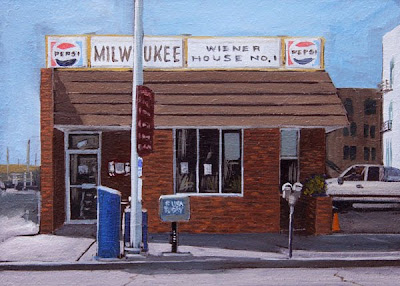 This is a Sioux City landmark. The Milwaukee Wiener House has been an institution in Sioux City for over 90 years. There are a few historic hot dog joints in the city and a nice article describing them was published in the Sioux City Journal recently.

Old advertising posted on the wall of the Wiener House boasts that it has served 4,000,000 hot dogs, but Gus Demetroulis says that statistic was true when he and his partner Thomas Eliades took over the restaurant in 1960. Today, Tom's sons Mike and John run the place and estimate that the current tally is likely close to 10,000,000 wieners sold.

I also should mention that it was featured just last week on one of my new favorite blogs called Iowa Backroads. The blog features a daily photo of an Iowa building and also a brief history of the building or the community it is in. Ironically, they featured the Milwaukee Wiener House last week at the same time I was starting this painting. What are the chances of that happening?

Let me know if you're interested in buying the painting of Milwaukee Wiener House? 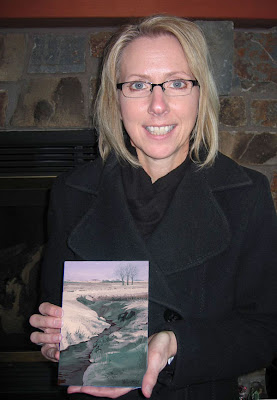 If you recall, Amy Van Roekel, from Orange City won the drawing for the painting recently. She was so happy to receive the painting and is going to give it a nice home on her mantle. That makes me happy.